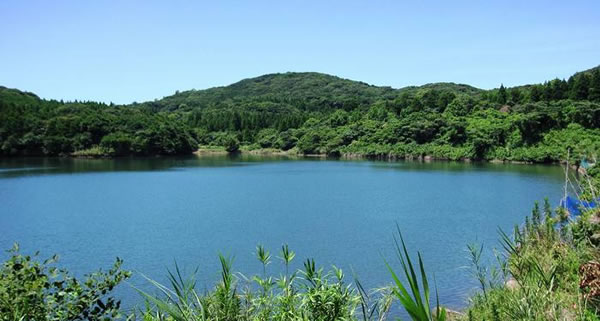 Manpuku-ike is a reservoir that is used for irrigation. It is on the way to Tsuchikawa from Hashima. The construction of the reservoir started in 1847. The Satsuma clan directly undertook the management of this construction. Takamori Saigo, who was 20 years old at that time, is said to have joined in on the construction of it. You also can find a rock with a dip called “Footprint of Saigo” by the lake.
Breakwater with Cobble Stone Stacking Work 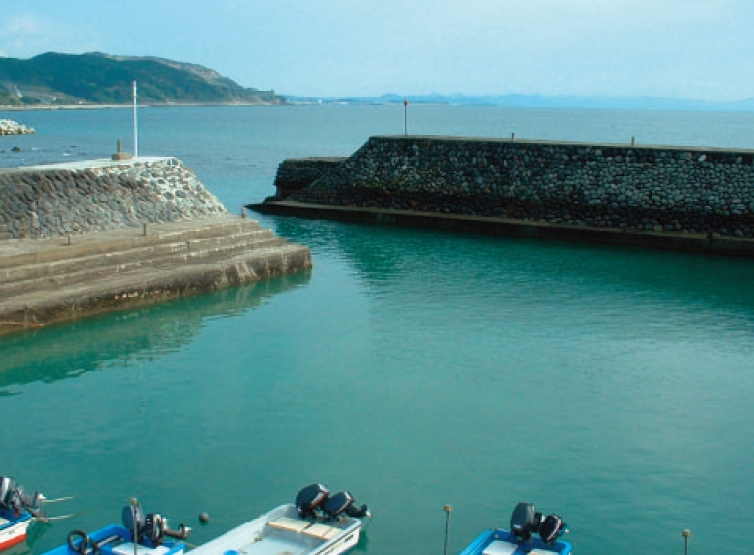 The breakwater with cobble stone stacking work at Hamanaka-ko (Hamanaka Port) is said to have used extra stones from the construction of Manpuku-ike. It was designated as one of “Japan’s 100 Historical and Cultural Assets of Fishing Industry and Fishing Villages” important for future generations.
Birth Place of Hitoshi Manzoji 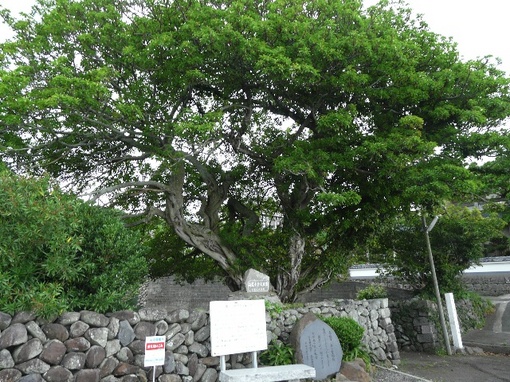 Hitoshi Manzoji was born in Hashima in Ichikikushikino City in the 19th year of the Meiji Period (1886). He entered Tokyo Teikoku University (currently University of Tokyo) and majored in English literature. He became a pupil of Hiroshi Yosano and cultivated close relationship with Takuboku Ishikawa, Kotaro Takamura and Hakushu Kitahara. He moved from Tokyo to Kyoto in the 6th year of the Taisyo Period (1917). He loved the nature of Kyoto. At his convenient time, he climbed mountains across Japan and composed tanka poems expressing his passion. He published some collections of tanka poems such as “Dokei and Hyohaku” and “Sangakusho.” He passed away at the age of 70 in July of Showa 32 (1960). A memorial service for Hitoshi Manzoji was held at his old school, Hashima Elementary School, in November of the same year. Hashima Shiseki Kenshokai (Association in Honor of Historic Sites of Hashima) erected a monument inscribed with three Manozoji’s tanka poems in Hashimazaki. A litterateur, Haruo Sato, selected these three poems and he also participated in the unveiling ceremony. “Anthology of Hitoshi Manzoji,” ten-volume collection of his tanka poems, was edited afterward.su_column]
Monument Inscribed with Hitoshi Manzoji’s Tanka Poems 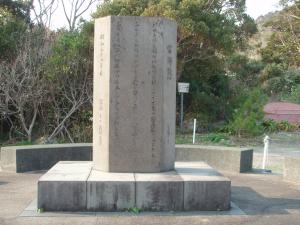 The monument inscribed with Hitoshi Manzoji’s tanka poems in Hashimazaki was constructed by Hashima shiseki kenshokai (the Association in honor of historic sites of Hashima) in March of 1960. Haruo Sato, a poet and writer, chose the three poems inscribed on the monument. In addition, Izuru Shinmura, a linguist and philologist, wrote the letters inscribed in the stone.
Unnomon, Hashima Fishermen’s Cooperative 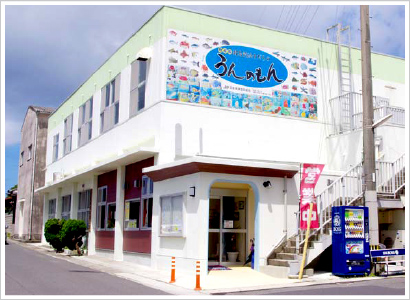 It is a product promotion shop under the direct management of Hashima Fishermen’s Cooperative. They sell marine products and local specialties.
Shirahama-Onsen, Kushikino-Shirahama-Onsen Misumaru-no-Yu 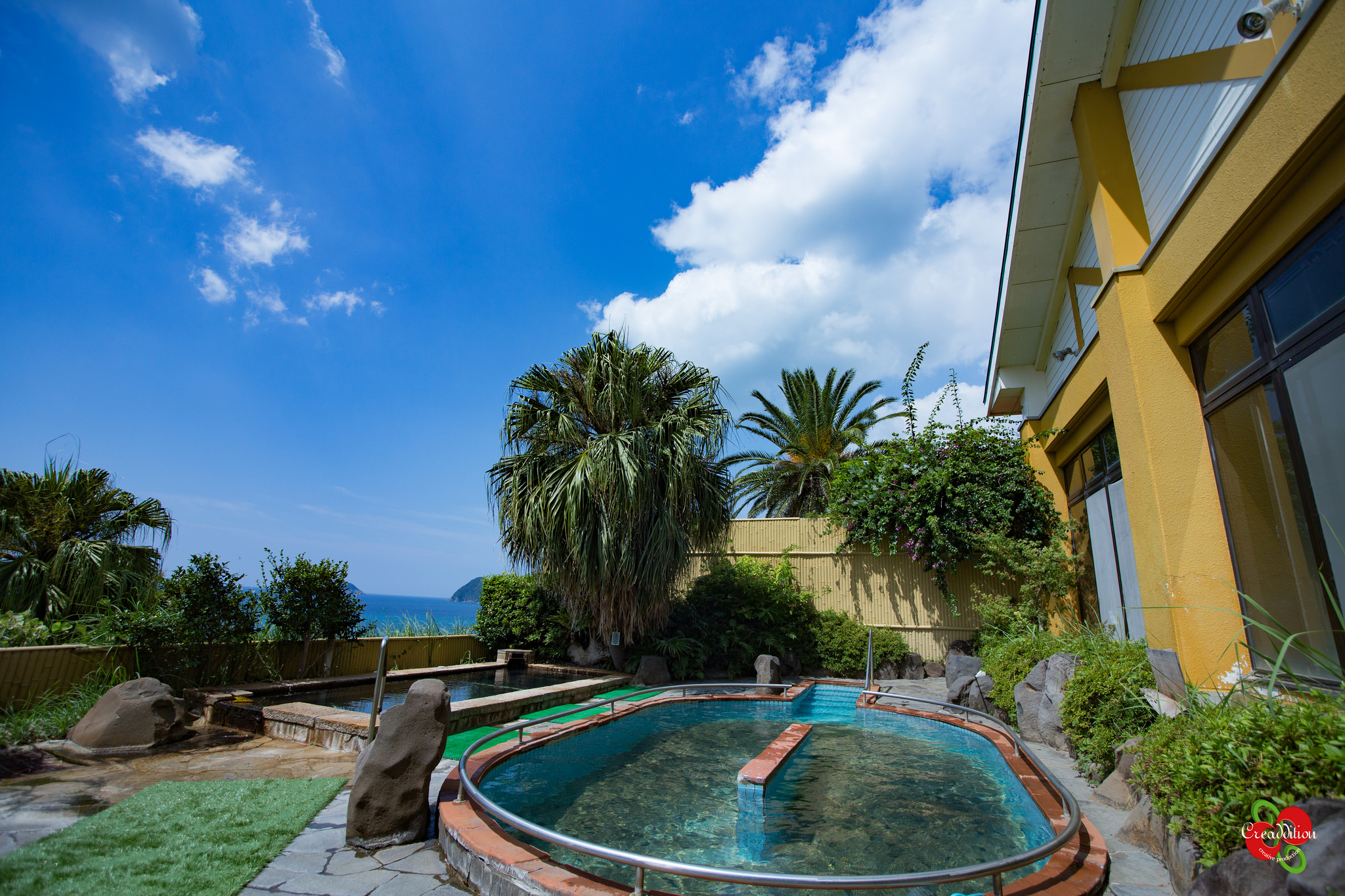 Kushikino-Shirahama-Onsen Misumaru-no-Yu is a hot spring facility on the way from the central part of Ichikikushikino to Hashima (prefectural road 43). You can see the tremendous view of the East China Sea from a large window of a large public bath, while you enjoy soaking in a hot bath-tub. There is a second bath which collects hot spring water directly from the source with no intermediary. Many elderly visitors enjoy visiting this hot spring.
Sunset Park 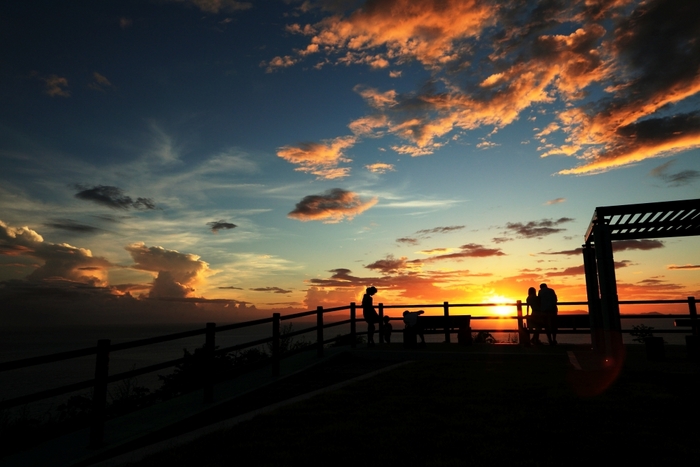 Sunset Park is located on a hill with a great view over the East China Sea. It is located on the way to Satsumasendai from Hashima (prefectural road 43). You can find Koshikishima Islands in front, and Mt. Noma in the south when the weather is fine. The sunset from the park is superb.
Hashimazaki-Jinja 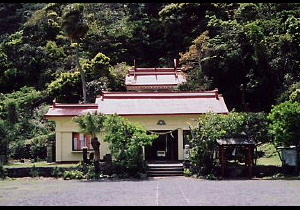 ※Source: Kagoshima Prefecture Shrine Office
Hashimazaki-jinja is a shrine in which the guardian god of Hashima is enshrined. It is said that one young hawk (Takasunokami) flew to Hashima and became the god of Hashimazaki-jinja. Also on the closest Sunday from February 4th on the lunar calender, a big festival is held at this shrine. There are two events. One is “Ta-Uchi”, which is for a generouse harvest of rice; and the other one is “Funa-Mochi”, which is for a big harvest of fish and a safe voyage. In the shrine precinct, there is another small shrine with a statue of the bust of Gonza. In 1728, Gonza was heading for Osaka under the order of Tsugutoyo Shimadzu, the lord of the Satsuma clan at that time. However, his ship was caught in a storm and he drifted to the coast of the Kamchatka Peninsula in Russia. Then he worked as a Japanese teacher in Saint Petersburg and completed the creation of a Russian-Japanese dictionary. Gonza is presumed to be originally from Hashima because some words similar to the dialect of Hashima region can be found in his dictionary. In 2010, the spirit of Gonza was called in his hometown after 282 years and enshrined.